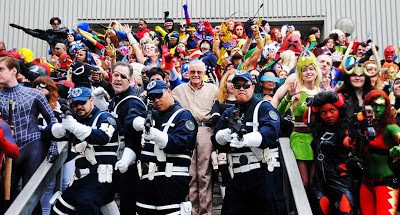 Today is anniversary of that boy who recited Shakespeare, and who dreamed of accomplishing great things - but he never imagined that he would become a myth in his own lifetime.

He managed to rebuild the battered American Comics industry and made the small publisher Marvel become the greatest creative power of Comics when he wrote exciting and optimistic stories, and created human protagonists with existential conflicts.

He influenced in his 90 years of life, professionals in Comics, Film and Television. He was called "The Homer of modern times" and "Mister Marvel"; and is loved by fans worldwide, and also admired by celebrities like Gene Simmons, Ringo Starr, Arnold Schwarzenegger, Larry Cohen and Tom Wolfe (just not to extend too).

Not unlike me. When I was just a kid, I discovered the comic books he wrote and decided I wanted to work in the Comics industry.

Suddenly, I was being paid to write and edit some comics, or to write about them. Magazines, books, graphic novels. My name was printed on every kind of publication.

Then came invitations to participate in debates, giving interviews to newspapers, talk radio and put my face on television. All these things have made and continue to be part of my job, but you know, I enjoy a lot!

And he was one of the main responsible for this. Because of him, my life became infinitely more fun and exciting.

Lancelot disse…
Happy Birthday Stan!
I thank you for all the great stories that made my childhood a blast!
I couldn't thank him more for the Fantastic Four, and all of his other creations.
You are The MAN!!!
28 de dezembro de 2012 10:09

Many, many thanks for that terrific birthday greeting and the great photo.

Wishing you and your family the Happiest New Year ever!

Anônimo disse…
Great article, Roberto! Stan had a huge impact on my becoming a writer too!
All best,
Peter
28 de dezembro de 2012 15:22

And thanks to you I managed to talk to Stan the first time a few years ago!

Tavares disse…
OMG, Thank you Guedes by these great insights about comics and to Stan Lee for absolutely everything since Silver Surfer and Thor, and Conan and, oh my god, everything! Everything that colored my childhood with great ideals and fun.

The entertaiment that became important in my live and that taught me great things. Thank you Stan and more 90 years of great realizations.
28 de dezembro de 2012 23:29

Clique no ícone abaixo para me adicionar no Facebook

Clique no ícone abaixo para me seguir no Twitter